Florida’s largest childcare service for daycare through 8th grade was seeking a rebrand to their 55 year old organization that matched their size and services they offer.

Since their founding in 1965, RCMA has grown from a provider of childcare to rural farmworkers into Florida’s largest childcare provider to underserved populations. Today, its 1,700+ employees serve children in 66 child development centers, and two charter schools and are growing. Additionally, RCMA provides critical services to the families of their children. With this explosive growth, they engaged our team seeking an updated brand that reflected their size, scale and services they offer. The downstream benefit of the brand refresh is targeted to improve visibility with alumnus and donors, both individual and institutional. “When we were searching for an agency of record, Sulzer Inc. was a natural fit. We are very family-centric and they instantly made us feel we were an extension of their family. Working with them has solidified our initial impression. They’ve been flexible and genuine at all times. The rebrand serves as the basis for achieving our organizational objectives."

Over the course of 55 years, RCMA had changed substantially in its size, scope and services rendered. The brand didn’t reflect this and created perception obstacles to its fundraising efforts. “RCMA serves such an important role for underserved populations of children in our home state of Florida” said Michelle Sulzer, Chief Creative Officer. “We knew this project would be important in helping to redefine how RCMA communicated with its stakeholders and shape its future.” With stakeholders ranging from the children and families RCMA serves, to employees, alumnus, donors, and government agencies, redefining who RCMA is was needed.

Our team began with a brand self-assessment, surveying RCMA stakeholders and distilling out important information. The essence of RCMA was overwhelmingly apparent and helped inform the rebrand. RCMA wanted to be viewed as compassionate, but not desperate. Rooted predominantly in rural, agricultural centers, leadership’s mandate was that their new brand had to allow for expansion geographically into more urban areas.

The rebrand first focused on the RCMA name itself. Originally, RCMA was founded as Redlands Christian Migrant Association. To its stakeholders, the name RCMA was synonymous with who they were and represented. Further, with 55 years of history, RCMA (phonetically) was well-known. The decision was made to keep the RCMA name, but phase out the long-form (Redlands Christian Migrant Association).

Next, focus was turned to the RCMA logo. With the understanding that children and families was a priority, our creative team emphasized fun and colorfulness. It incorporated RCMA’s roots as a rural-based provider of childcare and services, fused with an urban twist.

A brand tone and messaging was developed to clearly and concisely articulate the essence of who RCMA had become, and where they were going.

The rebrand consummated with a new, streamlined website, and numerous brand assets including print, digital and social. 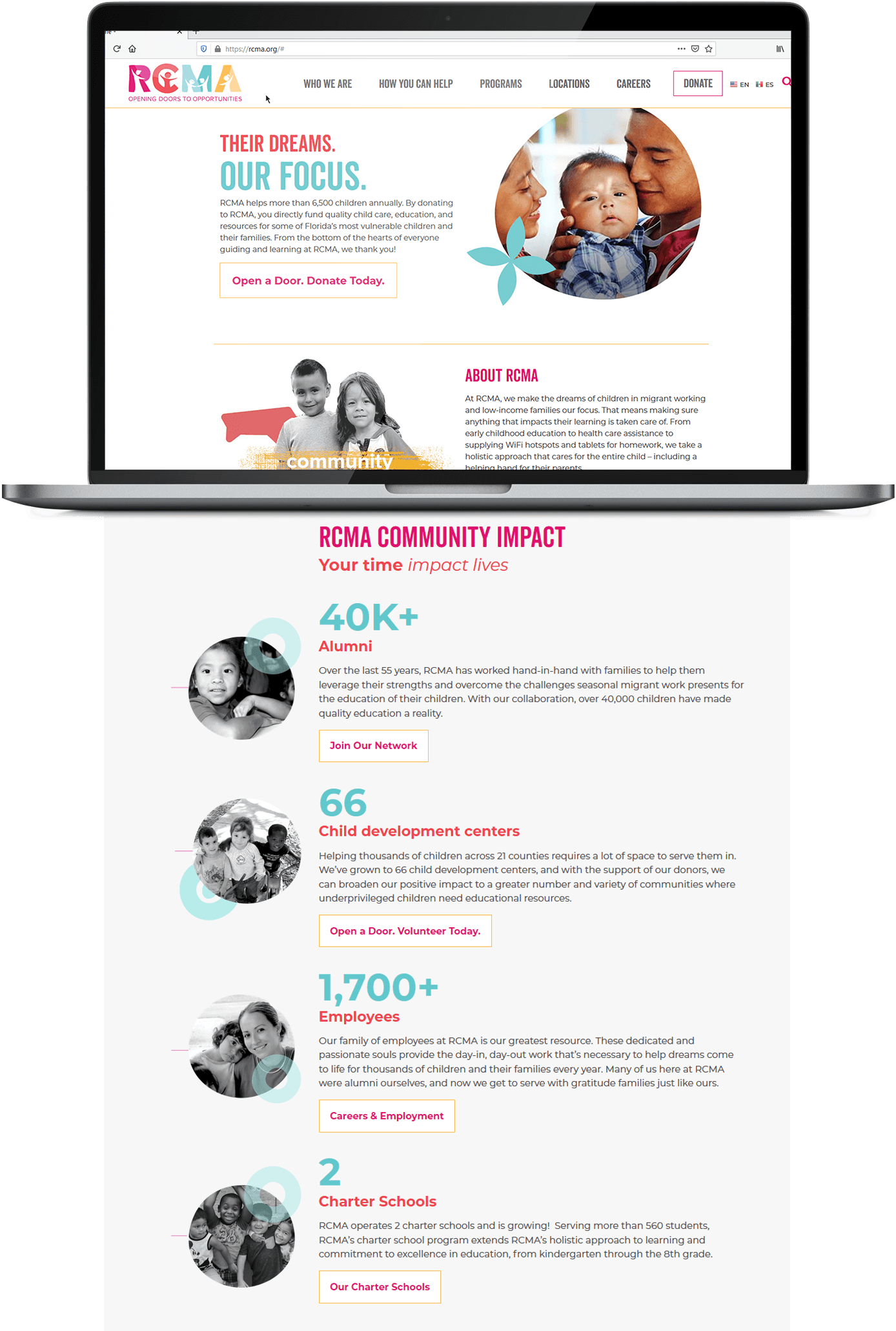 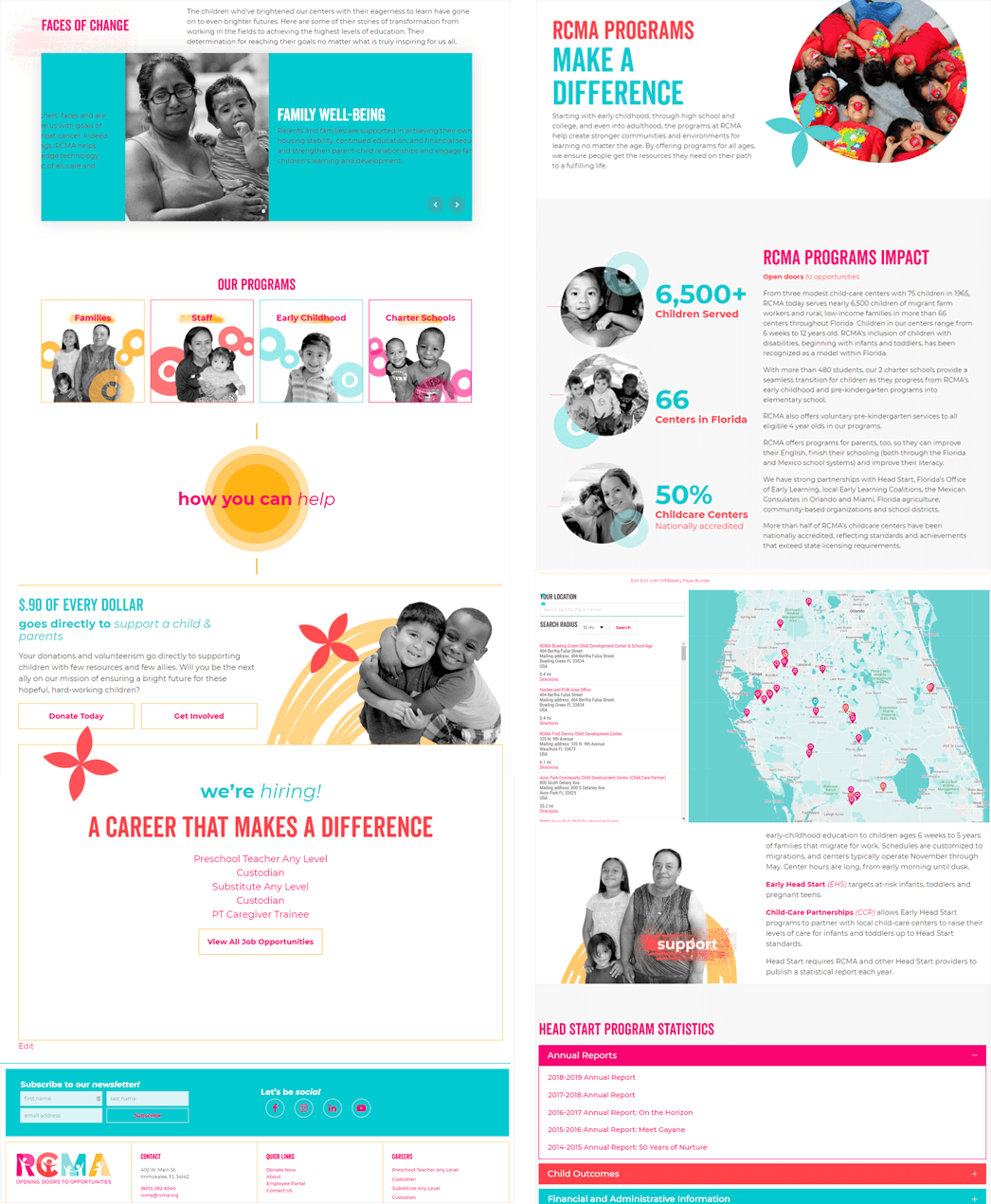 April has been a busy month at the Sulzer Agency.

Today we are highlighting just a few of our client

🔔 Here’s a first look at a project we’re so

🎂Today is a Very special day at Sulzer Inc.! It

🌟Once a month we will be highlighting one of ou

Tis the Season, for celebrating with friends! The

The Sulzer Inc. family is cheering on some of the

Booooo from the Sulzer Inc. Crew! 👻 Sorry for